GLEIF’s verifiable LEI issuer qualification programWhat are Child Entities and How do They Relate to Other Entities?Do I need an LEI when selling shares?Business Transparency: How to Create an Environment of TrustAnti Money Laundering (AML) in Banking: Everything You Need to KnowCorporate Structures Demystified: What You Need to KnowKYC in Banking: Why It’s Important and How to ComplyWhat is a parent company and how does it work?How long does it take to get an LEI?ISO 5009 – Identifying organizational rolesISO 17442 – Standard for LEI code structureESRB discusses the future of LEIGlobal Business Identifier (GBI) – Trade Transformation InitiativeWhat documents are required when registering LEI?How to get an LEI?Who is an LOU in the LEI Dimension?GMEI Utility vs LEI RegisterLapsed LEI – Why should you keep your LEI active?Who is an LEI Registration Agent?Are LEIs public?What is LEI transfer?Can an individual have an LEI?Do LEI numbers need to be renewed?Why is an LEI number required?How much does an LEI number cost?LEI Lookup – Fully dedicated LEI search websiteISIN to LEI mappingGLEIS | Global LEI SystemMiFID regulation | MiFID II LEIvLEIGLEIF | Global Legal Entity Identifier FoundationCompany Autocomplete by LEI RegisterOpen LEIEuropean Market Infrastructure Regulation | EMIRWhat is an LEI database?LEI Application – Apply For An LEI OnlineLEI Checker – Search Your LEI OnlineWho Needs An LEI Number?LEI for TrustsLegal Entity Identifiers in CryptocurrencyLegal Entity Identifiers in KYCDigital Identity Predictions for 2020The Future of Cybersecurity – DeloitteLegal Entity Identifiers in Digital CertificatesBroad Adoption of LEIs Could Save The Global Banking Sector US $2-4 BillionLegal Entity Identifiers for Government EntitiesThe European Market Infrastructure Regulation (EMIR) and Legal Entity Identifiers (LEIs)The FCA Will Take Pragmatic Approach to Supervising Reporting on Brexit DayAdoption of LEI in Payment Messages by the Payments Market Practice Group (PMPG)RegTech London – Event SummaryWhat is LEI-Search?LEI Register and RapidLEI Announce Official Partnership

The LEI ROC has stated, at the GLEIS Forum on the 22nd May 2019, that government entities are eligible for a Legal Entity Identifier (LEI) as they are legal entities according to ISO 17442, in the same conditions as other entities.

i.e. “if they could enter independently into legal contracts, regardless of whether they are incorporated or constituted in some other way”.

They also found that entities that cannot be incorporated such as ministries, agencies and republics are eligible for an LEI. It was clarified that these entities should enter a parent entity when applying for a LEI where previously this information was not being entered.

For this reason, the LEI ROC is looking to create a new item called “general government entities” which could be filled out separately and help to clarify, if there is no parent entity, at least what industry these entities belong to.

This shows a small shift in the collection of entity data. The LEI ROC want to know more about government entities and more accurately reflect the hierarchy of these entities. The LEI ROC has therefore published a public consultation on the subject of adding “general government entities” as a classification item under the Legal Entity Identification application process.

Here is a summary of that consultation paper.

Are government entities such as Ministries, Agencies and Republic, eligible for an LEI even if they are not incorporated or have no other legal personality?

The LEI ROC has observed that the ISO 17442 definition of legal entities covers government entities and the criteria for eligibility for a LEI is the same as for any other type of legal entity.

“include, but are not limited to, unique parties that are legally or financially responsible for the performance of financial transactions or have the legal right in their jurisdiction to enter independently into legal contracts, regardless of whether they are incorporated or constituted in some other way.”

The LEI ROC are satisfied for this definition to include government entities that are not incorporated or have a legal personality as long as they enter legal contracts under their jurisdictions laws such as issuing, buying or selling financial assets.

How to figure relationship data within the general government sector

Under LEI application procedures today, the definition of a parent (either direct or ultimate) is currently based on accounting consolidation.

This definition may not suit government entities as these relationships are not usually consolidated in financial statements.

The current standards in the Global Legal Entity Identifier System (GLEIS) state that a legal entity can opt out of the collection of its parent’s entities information if there is no parent according to the definition. This could include legal entities who’s parent is a natural person, does not prepare financial statements or there is no known person controlling the entity such as a diversified shareholding. This means that under the current definition, government entities can opt out of parent reporting and this is expected to happen in the majority of cases.

This is a difficult position to define. With corporations, the direct parent is generally the entity with the shareholder control. There are some organisation which are part or fully state owned and therefore there is a similar relationship. On the other hand, many government entities appear to exist more as siloed entities either on a local or national level and act independently from the levels above and below it, both financially and with accountability within the public sector.

“An institutional unit is an economic entity that is capable, in its own right, of owning assets, incurring liabilities and engaging in economic activities and in transactions with other entities.”

Institutional units are grouped together to form institutional sectors on the basis of their functions and objectives. The five sectors are:

“consists of institutional units that, in addition to fulfilling their political responsibilities and their role of economic regulation, produce services (and possibly goods) for individual or collective consumption mainly on a non-market basis and redistribute income and wealth.”

“Social security schemes are social insurance schemes that cover the community as a whole or large sections of the community and are imposed and controlled by government units. The schemes cover a wide variety of programmes, providing benefits in cash or in kind for old age, invalidity or death, survivors, sickness and maternity, work injury, unemployment, family allowance, health care, etc. There is not necessarily a direct link between the amount of the contribution paid by an individual and the benefits he or she may receive.” 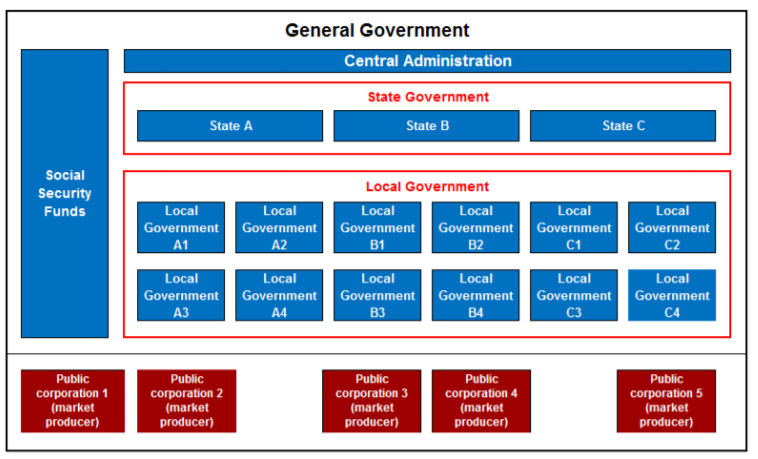 The issues with these definitions and in fact, trying to define government entities is mostly around how different countries organise their government. Some countries have several ministries, each as an institutional unit while other countries have separate units that are defined to be under an overarching ministry. There are also some cases where the local units and ministries have no legal personality but represent the state when entering into contracts. It is also important to define when a public corporation is not owned by government.

The GLEIS should be committed to identifying legal entities based on the ISO 17442 definition for which a schematic structure can be represented in the following figure from the LEI ROC consultation paper. 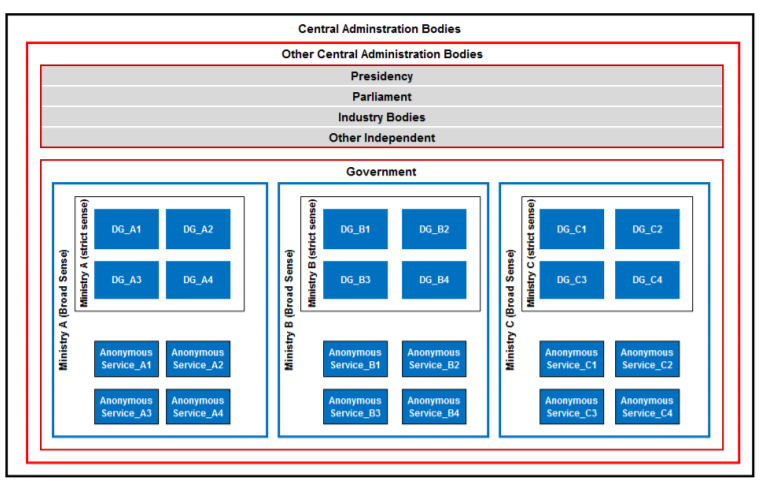 The Importance of LEIs for Government Entities

Bringing government entities under the scope of Legal Entity Identification is an important step for the future. Fighting for transparency and an open framework is just as important in the public sector as it is in the private sector and if we think about where a lot of current fraud exists, we know that governments tend to be a target. The UK public sector alone is losing £20.6 billion a year to fraud.

If you’re interested in legal entity identification for your government entity, get in touch with us today.

Dear customer, there is a possible duplicate match between your application and Global Legal Entity (GLEIF) database. Please check the information below to confirm if this is your company or not.

In case this is your company information above, click YES to proceed to LEI renewal application. If you are sure this is not your entity, click NO and proceed with new LEI application.